São Jorge, located in the central group, features a long volcanic ridge stretching from the northwest to the southeast of the island. The plateau of the inner part of the island, where the volcanic cones that generated the island were born, gives way to high, steep cliffs that either come to an end in the deep blue sea or in small flat areas at sea level, know as the famous Fajãs of São Jorge.  Flattened surfaces formed near the sea, which are framed by the imposing cliffs, are called Fajãs which resulted either from lava flows that entered the sea (such as Fajã dos Bodes and São João) or from the erosion of land and rocks from the cliffs (as is case of Fajã dos Vimes) due to earthquakes, heavy rain or another instability.

The coastline of the island is characterized by the towering Rosais Headland, facing Faial, and the Topo Headline and Islet on the eastern side, which enhance the natural beauty of São Jorge. From Fajãs of Cubres and Caldeira de Santo Cristo, with their coastal lagoons, to the lava Fajãs of Velas, Almas and Ouvidor, there are a wide range of places to enjoy. In Calheta and Topo, picturesque ports are the gateway to centuries-old homes and churches, all with stories to tell. In Velas, the Portão do Mar (Sea Gate) has welcomed travelers that arrive in the port by boat.

São Jorge Cheese is probably the most well-know food product of the Azores. This cheese is hard/semi-hard an has a slightly peppery aftertaste. It is round-shaped and weights from 7 to 12 kg, and is cut into wedges. Spontaneously born and raised in the lagoon of the Caldeira de Santo Cristo Nature Reserve and Special Ecological Area, the clams are another exclusive food wonder of São Jorge island. A rare case in Europe, in Fajã dos Vimes you can enjoy coffee of intense taste and aroma, made from locally sourced beans. 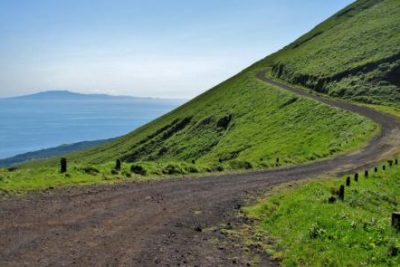