Europe´s westernmost point can be found on the island of Flores. The naming of Flores island (meaning flowers) is thought to be related to the abundance of natural flowers. Among the intense greens of the vegetation, there are outstanding waterfalls and streams which waters a natural garden of colorful flowers, where the pink of the azaleas and hydrangeas stand out. One of the most famous monuments of the Azores, the rock Rocha dos Bordões is made up by a large set of vertical basalt columns.

More geological formations with peculiar shapes can also be seen at the hill Morro dos Frades, where the shadows of a friar and a nun can be seen by some. Even more symbolic, the Monchique Islet represents the westernmost piece of land on the European Continent. Seen from Vigia da Ponta Negra it close to the Albarnaz lighthouse. Countless islets, headlands, shoals, inlets, coastal caves, waterfalls, and impressive valleys are some of the particularities that the coastline of Flores offers. Adorning the high cliffs of the south coast, Fajã Nova at Ponta da Rocha Alta and Fajã de Lopo Vaz can be reached by a waling trail carved along the cliff. Ponta Delgada, Santa Cruz and Lajes are other points of interest.

Flores salted pork meat is cooked and served with potatoes and cabbage. Taro root with sausage and watercress soup are also included in the most traditional recipes of Flores. The dried cheese produced on the island features a soft paste with a firm texture. The tart tortas de erva patinha bring together the concept of an omelette served with algae which grows on the shores. Fish is part of the cuisine heritage of the island and is served in recipes such as roasted tuna and stewed conger eel. From the guava tree, yellow, red and purple fruits are picked to make a local dessert. The honey is absorbed with the aroma of the thousands of flowers that embellish this island. 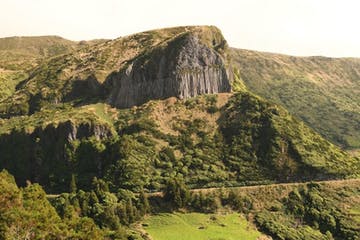