Faial Island is part of the Central Group and is the westernmost corner of the so-called “Triangle Islands”. At the westernmost point of the island, the Capelinhos Volcano majestically rises up to the sky. It is the last volcanic eruption that took place in the Azores and added new land to the existing one. On the abrupt cliffs of Capelinhos and Costado da Nau, one can see the inside of these volcanoes in a sequence of contrasting rocks, layers and contours boasting surprising colors and textures. At present, the lighthouse is not operational but is home to the magnificent Interpretation Center, featuring the most advanced multimedia and exhibition techniques. The visit ends with a climb to the top of the lighthouse to enjoy an unbeatable emotional and visual experience.

Faial offers great lookouts and views over the neighboring island: by ruins of the Ponta da Ribeirinha Lighthouse one can enjoy the sublime outline of the island of São Jorge; at Ponta da Espalamanca, in the lookout monument of the Saint Nossa Senhora da Conceição and in front of the whole Bay of Horta, you can see the Pico Moutain Rising majestically. Looking inland, great extensions of pasture land come into view; they climb all the way up to Caldeira, being interrupted here and there by woods and trees.

This natural landscape coexists on the island with enduring elements of human presence, with some typical windmills painted red and dotting the landscape, along with flowery and cultivated fields in Flamengos Valley, and rows of hydrangeas painstakingly aligned along roads and fields. And on the way between Varadouro and Castelo Branco a rock surrounded by water and sea birds catches our attention. This is the Morro de Castelo Branco, which lives up to its name with trachyte white rock and a castle-like shape, as if it was once an almost indestructible fortress.

Of the Triangle Islands, this is the one that has the most volcanic-sand beaches; The Porto Pim, Almoxarife and Norte Beaches invite you to enjoy a spot of sun bathing. The shape of the east coast varies considerably; sometimes it is high and other times it lies almost at sea level, given the action of gigantic tectonic forces that divided into several blocks of large dimensions.  The coastline on the west side of the island is dominated by the imposing cliffs of Ribeira Funda and Praia do Norte and the ones that lie between Morro de Castelo Branco and Varadouro, sharply plunging into the deep ocean. Horta Marina, which opened in 1986, is one of the world´s most famous harbors.

One of the most typical dishes of Faial is stewed octopus in wine, which is also as common on the other islands of the archipelago. Fish is very important, especially stewed or served in a broth. Bread and corn cake are preferably included during meals. As for meats, there are local sausages, eaten either as a meal, when served with taro root, or just as a snack. The recipe for boiled beef tastes better when spiced, especially with pepper, cumin and cinnamon to stiffen the broth in which the beef is cooked. As for pastries, the Fofas do Faial are typical: these aromatic pastries include fennel seeds and are baked before being stuffed with a cream base mixed with egg yolks, milk, sugar, flower and lemon peel. 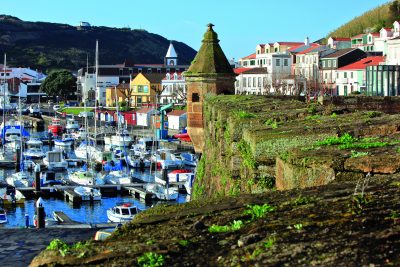 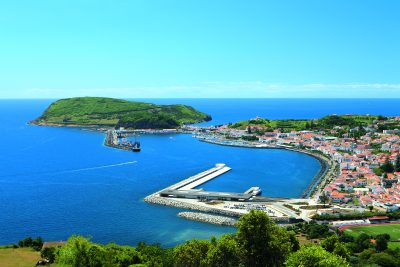 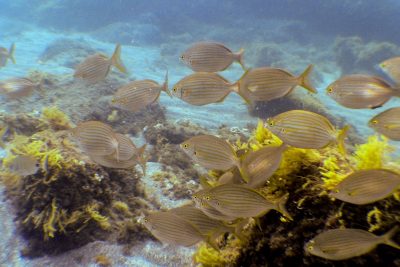 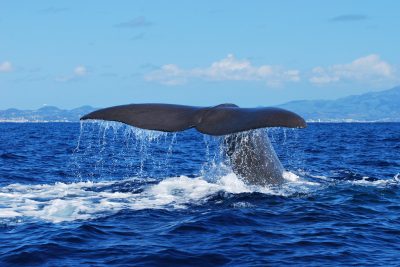